Wondering how you can recover data from your damaged Samsung phone? While Samsung phones are great, after the debacle of the Note 7 or Galaxy S8, you might just wonder whether and what you need to do in case of data loss. This article will recommend you with the best data recovery software for damaged Samsung devices.

Samsung is globally acknowledged as of the most premium smartphone brands. Whenever we decide to buy new smartphones, we always consider Samsung products because of their durability, sophistication and functionality. However, Samsung phones can unexpectedly break or suffer from cracks. It might because of the user's carelessness or a genuine accident. Accidentally dropping a phone can harm the phone both internally and externally. The extent of the damage depends on the structure and make of the phone.

Then, how to use Broken Android Data Extraction to recover data from a damaged Samsung Galaxy S8/S7/S6/S5, Note 7/6/5/4? Read the following tutorial and you will know how to do that.

How to Recover Data from A Damaged Samsung Galaxy Device?

Once you install the Broken Android Data Recovery on your PC, you need to connect your damaged Samsung device to the computer using a USB cable. Click on the mode "Broken Android Phone Data Extraction" to continue with the task. 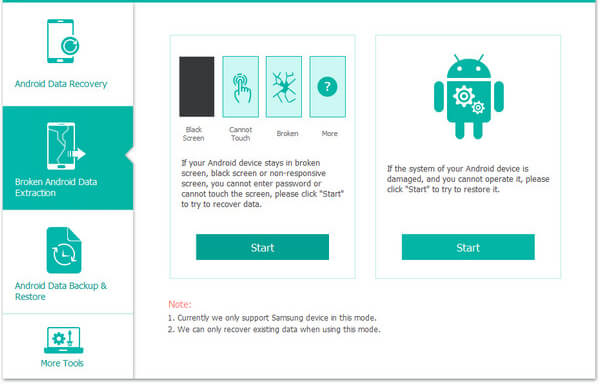 Step 2. Confirm name and model of your Samsung phone

If your Samsung phone has undergone physical damage, then you can press the "Start" button. You have to confirm the name and model of your phone before progressing, On the other hand, if there is some problem with the Android OS, you have to select the "Fix Device" option. 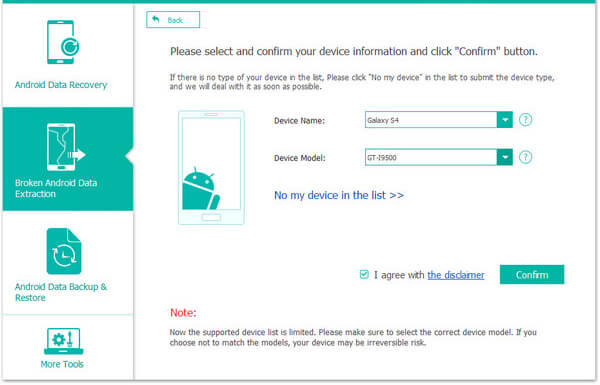 A series of onscreen prompts will lead you to the Download mode where you have to press the "Start" button so that the program can scan and fix any system issues.

Once the contents of your Samsung device are scanned, you can see the results on the screen nearly divided into categories. Put a check beside the ones that you do want to recover and click "Recover" button to save them on your computer.

Broken and damaged phones do not seem that daunting anymore, do they?