How to Recover Deleted Contacts from Google Nexus 6?

Google Nexus 6 is a brand new product of Google with pure Android operation system, which offers 64GB and 128GB memory version for choice so that users can choose their ideal one to store all their important data. However, sometimes users may format their phone with the intention of increasing disk space or erasing information of a previous owner in case the device has been stolen. This may lead to the erasing of useful information and data such as contacts, messages, photos, videos as well as ebooks. Among them, losing contacts on Nexus 6 can be painful and it is hard to get them back without an immense amount of energy. Will you ask your friends one by one for the phone number?

Do not bother any more! Now, a reliable Android data recovery tool like Coolmuster Lab.Fone for Android (with its Mac version - Lab.Fone for Android Mac) can do everything for you, including rescuing all your lost, deleted and formatted contacts in your Google Nexus 6. It is a highly recommended data recovery for Android which aims to recover lost data, such as contacts, text messages, photos, videos, music and more from not only Nexus 6/5/4/3, but also other more Android devices like Samsung, HTC, LG, Motorola, Sony, etc. Apart from recovering lost data, Lab.Fone for Android also enables user to create a back up of the recovered files on their disk storage. It is useful as it can be used to replace lost data after the crash of the device or after deletion by mistake.

Newly got a Google Nexus 6 but confused on how to recover deleted contacts from the new Android phone? Don't worry and let the Coolmuster Lab.Fone for Android to help you and restore your contacts effortlessly without any quality loss.

By the way, we have Coolmuster Android SMS+Contacts Recovery, which is specially designed to recover lost and deleted text messages and contacts from Android phones.

Guide to Use Android Data Recovery to Restore Nexus 6 Contacts

Step 1. Connect Nexus 6 with your computer

Install and launch the Android data recovery software on your computer. Use a USB cable to link your Nexus 6 to the same computer and make sure you have enabled USB debugging on your phone. If you haven't rooted your Nexus 6, then root it firstly by following the instruction in the below. After that, you can go to the next two steps.

After the USB debugging, the software will recognize your Nexus 6 and you will get its main window as below. Open the "Contacts" folder from the left-side column and preview to find your deleted contacts on the Nexus 6. 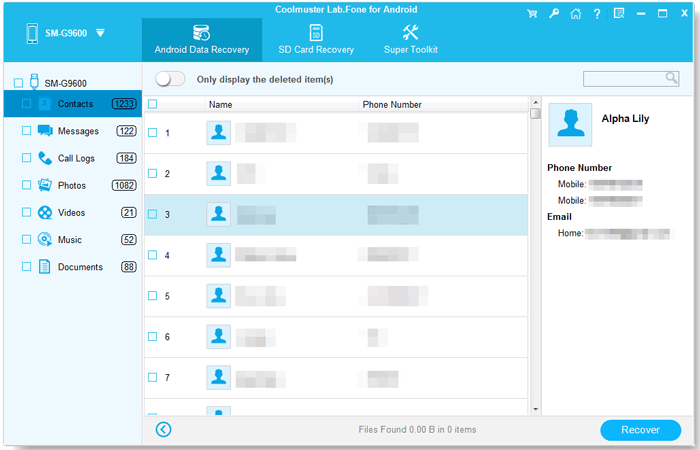 Choose your wanted contacts by ticking off the checkbox in front of them and then you can click "Recover" to save the selected contacts on a safe place on your computer. All the recovered contacts can be saved in the formats of html, VCF or Json.

No matter how you lost contacts and other data from your Nexus 6, Lab.Fone for Android will make it easy to recover them back.

How to Recover Text Messages from Broken Samsung Phones

How to Remove Duplicate Contacts from Android Phone