During the usage of a mobile phone, users can encounter a variety of damage problems on the device. The breakage may either be external or internal. It is not always that the glass breaks. You can have your screen not working while the glass is still in good condition as this depends on the cause of breakage. A child or even an adult may be using the phone, and somehow if angered they may be through the phone from a distance if it hits something or even the ground then the screen may be broken. The damage may also be caused by water. Most people like going with their phones to the washrooms. Accidentally, the phone may fall and ones it absorbs some water then the screen may not work clearly thus an internal breakage.

If your Samsung phone unfortunately gets malfunctions caused by water damage, the first thing you should do is to save the data on phone before fixing it. Then how to restore data on water damaged Samsung phone? You can try a professional Samsung data recovery tool like Broken Android Data Extraction to recover photos, videos, songs, text messages, contacts or other major data directly from water damaged Samsung phone completely. Most models of Samsung phones, as well as other Android phones are supported to restore data with this Android data recovery software. Such as Galaxy S7/S6/S5, Note 6/5/4, A9/A8/A7, etc. and HTC, LG, Motorola, Sony, Google Nexus, Huawei, Xiaomi and so forth.

How to Recover Data from Water Damaged Samsung Galaxy?

Step 1. Get ready with the broken Samsung data extraction software 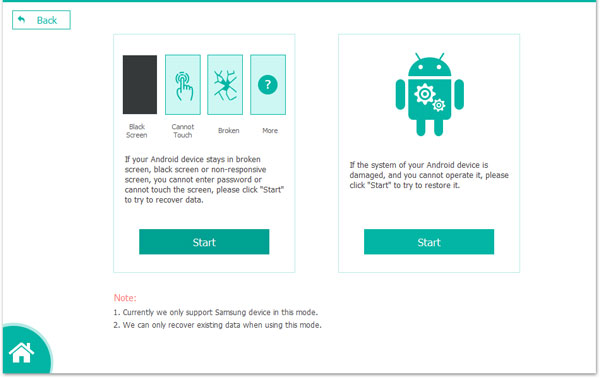 Choose the fixing mode and click "Start". Then choose the name and model number of your Samsung and click "Confirm". If you are not sure about the information of your phone, you can click question mark the program will show you how to find the information. 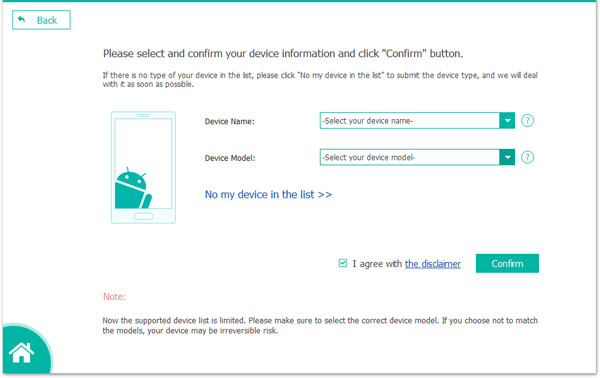 You will be asked to put your Samsung device into Download Mode. Just follow the onscreen prompts to put your broken Samsung in Download mode. After that, the program will detect the phone and scan out data on it instantly.

User should look at the preview of messages to identify and selected which ones that they want to save. After the wanted data has been selected, the user will hit the 'Recover' button to complete the process.