How to Transfer Files from iPad to New Computer

When an individual buys a new computer or replaces an old computer with a new one, they may want to start fresh adding all kinds of new useful software applications. In some cases, the new computer will be used for personal activities, business functions or for both. Regardless to the need or purpose, there are some things that the user can do to make their lives more efficient. One of the most notable is making sure that the new computer and the other devices that they have at their disposal are running the same applications simultaneously.

Related: How to Transfer Apps to New iPhone

Problems in Using iTunes to Sync iPad with New Computer:

So, for those of you who are interested in starting and completing the process of syncing your iPad to your new computer, you may choose to use iTunes. Before getting started, however, there are a few things that you will need to know. Some of the most important involves reviewing some of the problems that a user may encounter while doing the sync from one device to another. Here's a list of the problems that other users have experienced so this process can take time.

1. Problems restoring the sidebar.
2. Issues with fixing syncing the music.
3. iTunes tends to get stuck on the "waiting for items to copy" step.
4. Problems with copying playlist.
5. Problems with syncing album art.
6. Difficulties with the drag and drop music to the new computer with iTunes features.
7. Problems with deleting duplicate songs.
8. System crashing when syncing apps.
9. Tap feature does not work properly.

Guide on How to Sync iPad with New Computer

As previously stated, you can sync your iPad to your new computer by using iTunes, however, when reviewing all of the problems experienced, you may want to see if there are other superior methods of syncing the devices. Fortunately, there is another method that can be used, which consists of using a Coolmuster iOS Assistant (Windows/Mac). With this software product, the process is much smoother and it eliminates all of the unnecessary issues that people commonly experience when they are completing the syncing of the devices with itunes. Meaning the Coolmuster ipad to computer transfer is the better choice.

How to Sync iPad to Mac Computer

Transfer Music from iPhone to Computer

Here's a brief overview of the steps that it will take to complete the transfer:

1. Run the software application and connect the ipad device to the new computer via a USB cable.

2. Once step 1 is complete, the user will have the option of previewing all of the files that's stored on the iPad prior to making the transfer.

3. Export the files. (any files that should not be exported can be deleted at this time).

4. Once the files have been exported, the user will receive a pop up window that tells the user the process is finished. 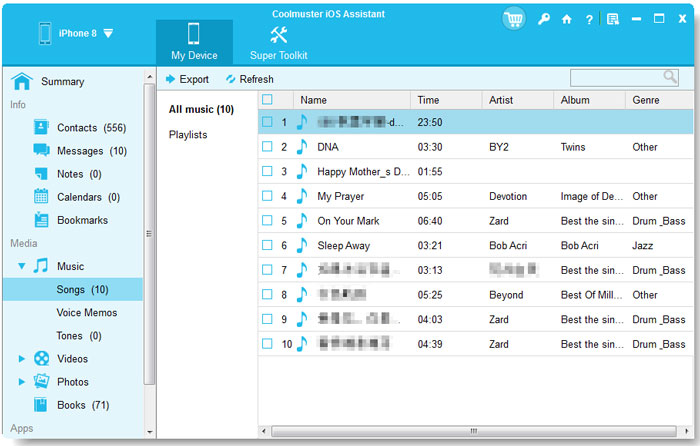 With this Coolmuster iOS Assistant (Windows/Mac), it is just a piece of cake to transfer files from iPad to new computer. So what are you waiting for you?