How to Transfer Text Messages from iPhone to Google Nexus 5/6?

Just recently, Google released the fifth generation of the Google Nexus smartphone series, Nexus 5, which is produced by third-party manufacturers LG OEM. With brand-new Android operating system, Google Nexus 5 brought us a lot of surprises. First of all, let's make a list to show you the new features of the new gadget.

* Carries the Android 4.4 kitkat system and Snapdragon 800 SoC, specifically MSM8974;
* Comes with a 4.95-inch 1080 p (1920 * 1080 pixels) IPS screen, and equipped with 2GB large memory (RAM);
* Also has 1.3 million pixels front-facing camera and 8 million pixels in the main camera;
* Uses the in-cell whole joint technology that enables you to easily see the content on the screen in the sun.

Since so many wonderful features can be enjoyed from the Google Nexus, you must can't wait to switch from your iPhone 4/4S/5/5S to the new Google Nexus 5. However, we can easily give away out old phones, but can't capriciously discard these valuable files stored on the old iPhone. The most ideal way to solve the problem is transferring all the important data from iPhone 4/4S/5/5C/5S/6/6 Plus to the new Nexus 5 or Nexus 6 before you make the phone switch.

Since iPhone is running with iOS operating system and Nexus 5 is Android, you'd better choose a professional third-party program to provide you a simple way to copy files from iPhone to Google Nexus 5/6. Actually, you can look no further than the iPhone to Nexus Transfer, a reliable iPhone to Nexus data transferring app makes it easy for you to copy contacts, SMS, photos, music, videos, apps and more to your new Nexus 4/5/6 or Nexus 7/10 tablet from iPhone 6/6 Plus/5S/5C/5/4S.

Download the free trial version of this iPhone to Nexus data transfer tool on your computer and then read the steps below to see how it works. Please note we will set text messages as example.

Step 1. Install and run the iPhone to Nexus SMS transfer

After downloading and installing the Phone to Phone transfer app on your computer, run it and you will see the primary window displays on your computer desktop, just like the following picture shows.

Note: All iPhone models are supported by this tool, such as iPhone 6, iPhone 6 Plus, iPhone 5S, iPhone 5C, iPhone 4S, iPhone 4, iPhone 3GS, etc. iTunes is required to be downloaded on your computer beforehand.

Step 2. Connect your iPhone and Nexus 6/5 to computer

Next, use two USB cables to connect your iPhone and Nexus 5 or Nexus 6 with computer. This data transferring program will recognize them immediately and display them on the main interface.

Tick off the "Text Messages" checkbox in the middle of the iPhone and Nexus 5/6. Then, click on the "Start Transfer" button to start the transferring process. Make sure to keep the two devices connecting to the computer all the way. 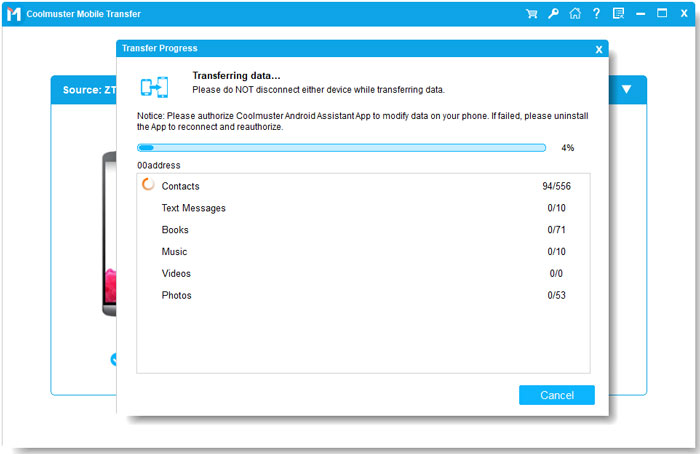 Note: You can conveniently switch the positions of iPhone and Nexus 5 by clicking the "Flip" button and files can be transferred from iPhone to Nexus 5, or from Nexus 5 to iPhone flexibly.