How to Copy Contacts between Nokia and LG G2/Optimus?

"Help! I use Nokia for a long time and now want to purchase a LG G2 Pro. What I can do to transfer my contacts from the old Nokia phone to my new LG phone without complex operation? If given any help, I will be appreciated."

Many people try to transfer phone contacts between two different mobile phones with the same way they did on media files like music, videos and photos, and hardly realize that contacts, as well as text messages can not be viewed and extracted on a computer via USB cable since they are saved in the internal memory of a mobile phone. Don’t try so hard, the best things come when you least expect them. Sole function of transferring contacts between Nokia and LG phones upon request can be solved properly by the third party software rather than mobile phone itself.

As the third party transferring software, Nokia to LG Transfer enable you to transfer contacts between Nokia and LG Optimus/G2/Viper/Ally without any hesitated. The advantage of the third party applications include that it can provide best services in unattended of software installing in mobile phone. It is widely used in emergency; for example, when you are facing the requirement of coping files between a phone and another, whatever iPhone, Android, Nokia or BlackBerry phone you are using, it can be installed on your computer and ready for use in any situations and anywhere you like.

Most important is that it can make you release your suffering in the problems of phone to phone transferring. The program provides the independent import and export functions, also it can be used to erase the transferred data from the original phone once after the transferring processing. Read the following tutorial to see how easy it is to use the Nokia to LG Transfer to sync contacts between Nokia and LG phones.

After downloading and installing this Nokia and LG phone transfer software, the interface will be shown as below. To transfer phone contacts between Nokia and LG mobiles, you should select the option of Phone to Phone Transfer to start.

Step 2. Connect your Nokia and LG phones to PC

Link the two phones with the computer by using two USB cables. You will see them displayed as below after they have been detected by the software. Your both phones will be displayed as "Source" and "Destination" in the window. If you want to change the two ways, you can click "Flip" to switch the two phones. 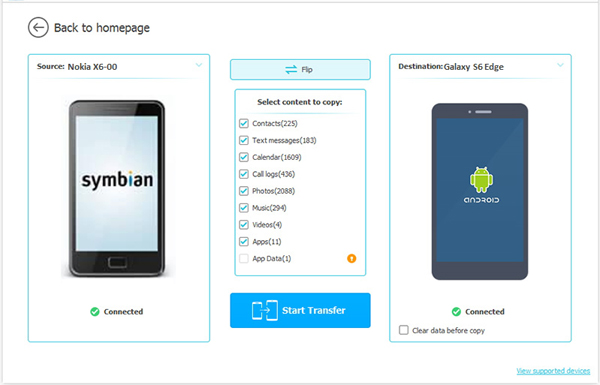 After both the phones are detected well, all the transferable data types will be listed on the window. If you only want to transfer contacts, you need to uncheck other data types except "Contacts". Finally, you can press the "Start Transfer" button to transfer phone numbers between Nokia and LG Optimus/G2/Viper/Ally with 1 click. 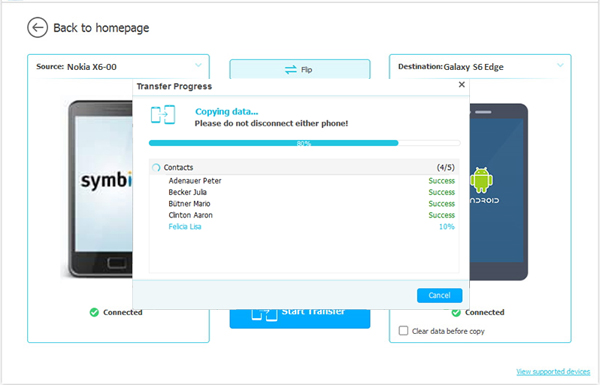 As you can see on the program interface, Coolmuster Phone Transfer is also able to transfer text messages, photos, videos, music, apps and even call history between two phones. Learn more by clicking on the below button: