How to Transfer Music Files from iPod Shuffle to iPod touch?

In 2001, a year when we were still reliant on MSN messenger for our social networking, Apple took the portable listening device to its sleekest, most elegant conclusion with the iPod. By 2005, we had gone through 6 generations of the, now wildly popular iPod before morphing into the ever shrinking IPod mini and nano to arrive at the iPod shuffle. Now, as technology advances, our devices are capable of more and more. The iPod Touch, which doubles as just about anything you want it to, dwarfs the iPod shuffle which came with 512mb or 1GB of storage in its original incarnation.

Why iTunes is not to be recommended to perform the iPod to iPod transfer?

Now, as technology advances, our devices are capable of more and more. The iPod Touch, which doubles as just about anything you want it to, dwarfs the iPod shuffle which came with 512mb or 1GB of storage in its original incarnation. Now, as we all upgrade to the latest model, there is just one problem. A 2005 time capsule of all your favorite songs remains on that iPod shuffle that would sound a whole lot sweeter on your fancy new iPod touch. It's impossible with iTunes unless you bought all your music through their store and if you try to do this through iTunes alone, but you risk losing all the music and files originally on one or even both iPods.

After searching for the right product, I have found that the best software for transferring music from your iPod Shuffle to the iPod Touch is iPod to iPod Transfer. It makes transferring data easy with three simple steps. The software works simply and easily every time and now, I feel like I have control over my data and I can listen to my music where and when I want to. I'm sure that iPod to iPod Transfer will work perfectly for you too. In addition to Apple products like iPad, iPhone and iPod, the program also supports Android and Symbian devices.

To quickly and easily transfer your tunes from iPod Shuffle to iPod touch with iPod to iPod Transfer, you can just follow the simple steps below. Before that, you should click the following button to download the software for free.

Run the best iPod to iPod music transferring software on your computer. Once it has been launched, it will pop up you with its primary interface like the following picture. Just choose "Phone to Phone Transfer" to go to the data transferring window.

Note: iTunes need to be installed on your computer if you want to transfer files from iPod device.

In this case, plug in your iPod Shuffle and your new iPod touch to the computer via two USB cables, but you could transfer between just about any device you can think of! Now, you will see your devices show on screen and a list of your data in the middle. If you want to change the positions of them, you can click "Flip" button to make a switch. 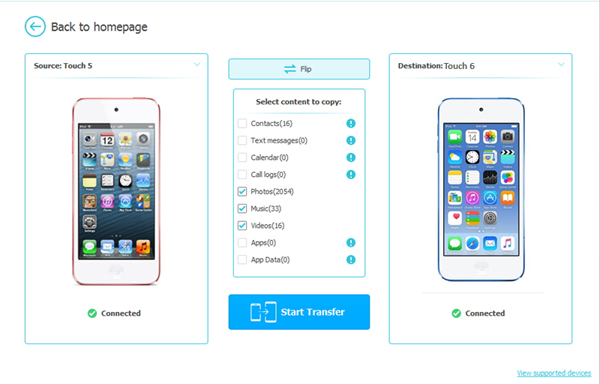 All you need to do now is picking which items you want to transfer and select them from the transferable data list like Contacts, SMS, Photo, Video, Music, etc. For this topic, you should tick the "Music" checkbox and give a simple click on the "Start Transfer" button. Then, all music files on your iPod shuffle will be copied to the iPod touch instantly without any quality loss.

Now, get this amazing phone to phone transfer software to share files between any two phones or tablets right away!