How to Run iPad Apps on Android Phone/Tablet?

If you are planning to change from your old iPad mini into a new Android tablet like Samsung Galaxy Tab S, or you just have the two types of tablets at the same time wanting to experience the difference of the two operating systems. Then, I think you must have the need to move your important data, such as frequently played apps, from your iPad to the new Android device so that you can go on enjoying your games on the new device with all your original game information and levels preserved. Fortunately, we have additional app that can help you transfer data between an iOS device and Android in a matter of minutes.

Do you think it will be possible to start enjoying your Android in exactly the way that you want, with all of your favorite iPad apps to hand in just a few mouse clicks? Sure! Coolmuster's new product - iPad to Android Transfer is able to help you transfer not only apps, but also contacts, text messages, images, photos, music, videos and more between iPad and Android phone/tablet. Whether you are planning to upgrade your phone, change carriers, or you just want to find an easier way to move photos and videos files between devices, you can use the Coolmuster Mobile Transfer app to make the process simpler than ever before.

iPad to Android Transfer supports all iPad models available, including iPad Air, iPad 4, iPad mini, The new iPad, iPad 2, as well as Android devices like Samsung, HTC, LG, Sony, Motorola, etc. Apps from the Apple store will not function without serious glitches on Android, so the best plan is to browse for Android versions before you start moving them between devices and your computer. This should not take you long, so there is no need to mourn the loss of quirky widgets and handy features.

Free download the trial version of the iPad to Android Transfer to have a try and this three step guide will show you how to transfer apps from an iPad to Android device.

Quick Way to Play All iPad Applications on Android Device

Step 1: Launch the software on your computer

After you have downloaded and installed the iPad to Android transfer tool on your computer, launch it. You will see its main interface as below. Don't forget to Install iTunes on your computer to make sure the program can work normally.

Step 2: Connect iPad and Android device to the computer

After launching iPad to Android Transfer, you will be asked to connect both of your iPad and Android device to the computer with USB cables. After a few while, the two devices will be detected by the program and listed in the interface as "Source" and "Destination". If you want to change the places for the two devices, you can click "Flip" button in the middle of them. 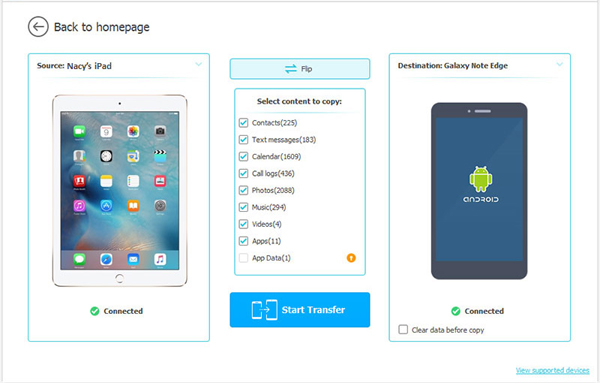 As mentioned above, you can copy apps, contacts, music, calendar, text messages, videos and photos between two devices. If you only need to transfer apps, you can remove the marks before the other items except "Apps". Then, click the "Start Transfer" button and within few seconds, all your iPad apps are saved successfully in your Android phone/tablet. 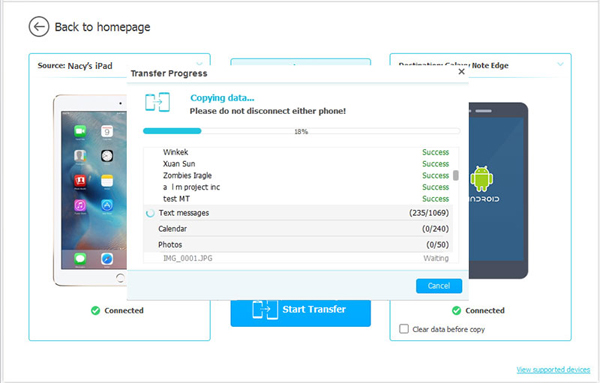 With the help of the iPad to Android Apps Transfer, you can move data around without ever losing a file or worrying about the security of your information.

How to Sync iPod to iPhone