"I now have a Samsung Galaxy S Android phone running Froyo 2.2.1 and an Archos 101 Android tablet and connect both to the same home network via Wi-Fi. Is there a method by which I can copy files directly between the two devices using Wi-Fi? Bluetooth is also an option, but since I want to copy a lot of thumbnail images, I think this is too slow."

Wired transmission is usually cumbersome, especially when you don't own a USB cable and a computer by your side. Therefore, it is more convenient to transfer files between Android devices via Wi-Fi. However, many people may don't know how to transfer data over Wi-Fi between Android phones. Don't worry. This post explains how to do it in 5 commonly used ways. 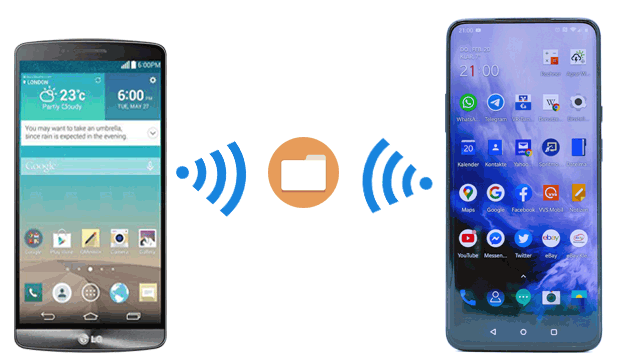 The fastest way to transfer files between Android phones is using Coolmuster Mobile Transfer. By connecting the two Android phones via a stable Wi-Fi network, you can transfer music, contacts, apps, call logs, SMS, photos, videos, and eBooks from Android to Android in one click without a data limit. Besides, this program also allows you to transfer files from iOS to iOS, Android to iOS, and iOS to Android over a Wi-Fi network.

What can you do with Coolmuster Mobile Transfer?

* Directly transfer data from iOS to iOS, iOS to Android, and Android to iOS over Wi-Fi.

How to transfer files between Android devices via Wi-Fi in the fastest way?

1. Install the program on your computer. 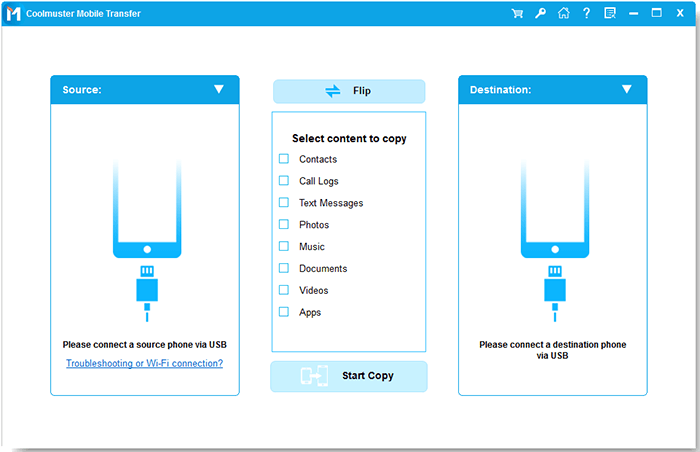 2. Connect the two Android devices to the computer over Wi-Fi.

Click the Troubleshooting or Wi-Fi Connection? option at the lower-right side to enter the Guide interface and choose Connect via Wi-Fi. Ensure that your Android devices and the computer are under the same Wi-Fi network. Then, download and install the Coolmuster Android Assistant (Android version) on both Android devices and run the program on your computer and Android devices simultaneously.

Next, use the Coolmuster Android Assistant (Android version) app on two phones to scan the QR code that appeared on the computer to establish a connection among them. Once connected successfully, you will see the Connected notification on your computer. 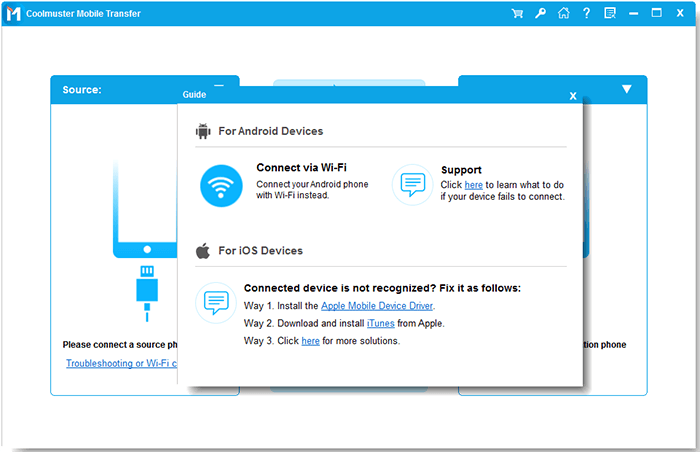 3. Start the Wi-Fi file transfer from Android to Android.

Tick the content you want to copy, such as contacts, music, apps, etc., and tap the Start Copy button to begin the data syncing process.

Way 2. How to Transfer Data from Android to Android via Wi-Fi via Coolmuster Android Assistant

The second best way to share files from Android to Android via Wi-Fi is by choosing Coolmuster Android Assistant. This software is very user-friendly since you can preview and selectively move the files you want between Android devices. Apart from data migration, it also enables you to back up and restore everything on your Android device on a computer in one click, including contacts, call logs, photos, videos, eBooks, SMS, apps, music, etc.

The highlights of Coolmuster Android Assistant:

* One-click to back up and restore the Android data on a computer.

* Preview and choose the desired files before migration.

* Support all Android phones and tablets running Android 4.0 and up, such as Samsung, Sony, Huawei, LG, Google, HTC, etc.

How do I transfer files between Android phones wirelessly?

Download and launch this software on the PC. Then tap Android Assistant to move on. 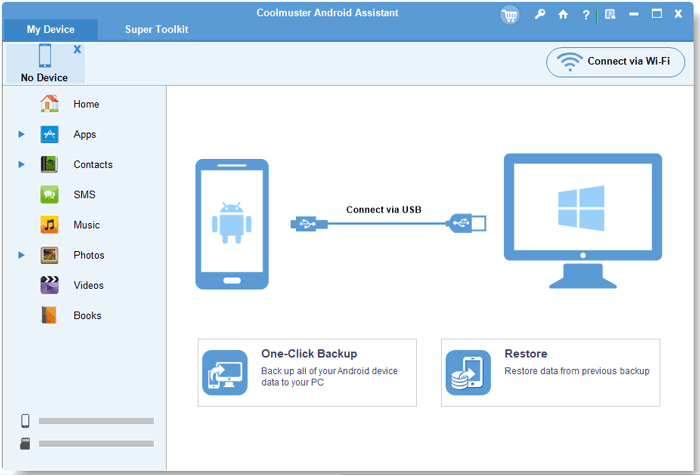 2. Connect Android devices to the PC via Wi-Fi. 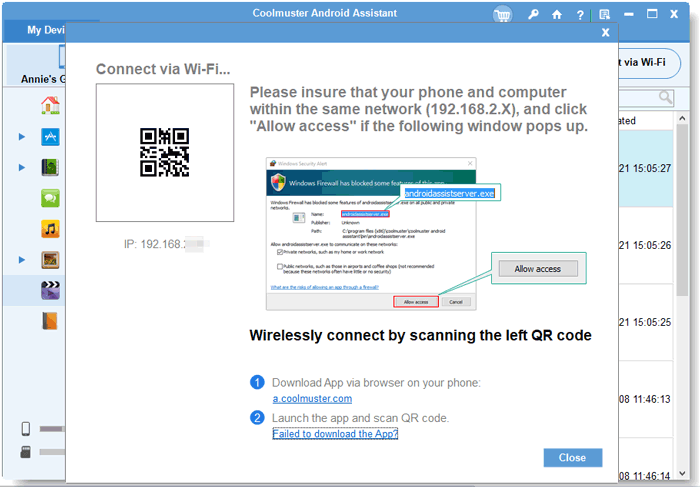 Click the source Android device under My Device and choose the data type you want to share from the left panel, for example, Photos. After that, preview and check the items you wish to copy and tap the Export button on the top menu to save them on your computer. 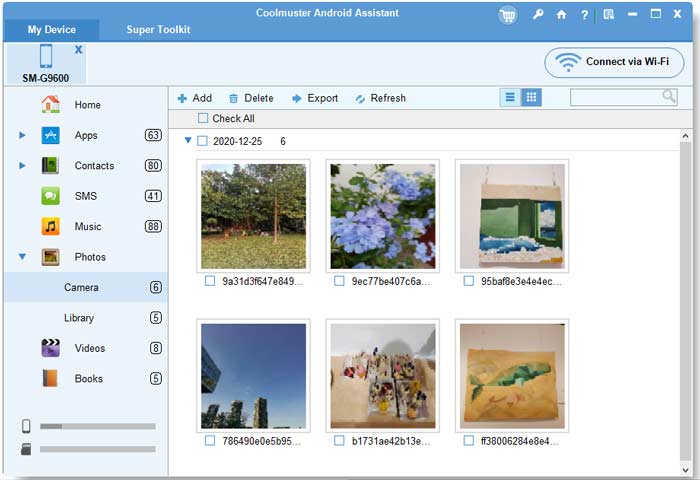 How to Transfer Files from Android to PC over Wi-Fi? [6 Ways]

Way 3. How to Transfer Files from Phone to Phone over Wi-Fi Direct

As a new Wi-Fi standard, Wi-Fi Direct allows two Android devices to create their Wi-Fi network without an intermediary wireless access point. Nowadays, most Android devices come with this feature under the Wi-Fi settings. To transfer files from Android to Android via Wi-Fi Direct, you need to do a series of settings as below.

How to transfer files over Wi-Fi to Android via Wi-Fi Direct?

1. Enable the Wi-Fi option on both Android devices. Then go to one Android's Settings > WLAN > More settings > Wi-Fi Direct.

2. After automatical searching, tap the other Android device name under Available Devices and choose the Accept option on the target device to establish a connection between them. 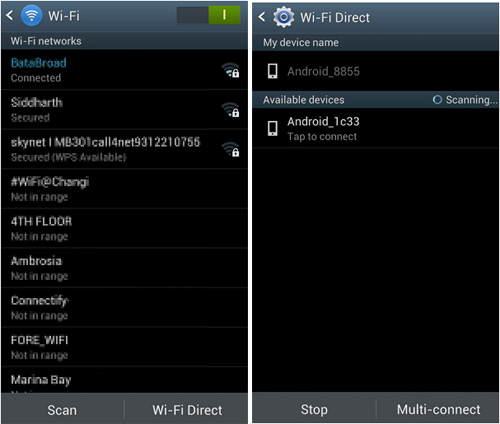 3. Transfer files from Android to Android. You can open the Gallery app on the source Android device > press and hold the desired photos > tap Share > choose Wi-Fi Direct from the pop-up window > click the target Android device name to send the selected photos over it.

Way 4. How to Wirelessly Transfer Files from Android to Android with Personal Hotspot

2. Navigate to one Android's Settings > choose Wireless & networks > click More Options > press Tethering & portable hotspot > turn on Wi-Fi hotspot. Afterward, toggle on the Wi-Fi option on the other Android and tap the same hotspot you created a moment ago under Wi-Fi networks to make a connection between two phones. 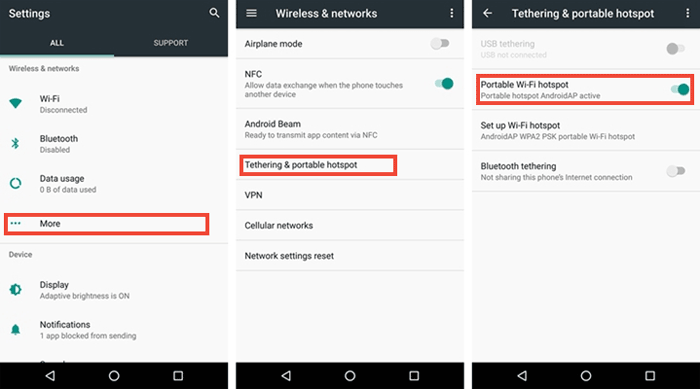 3. Open the ES File Manager on the sending phone, browse and click the files you want to transfer, and hit More > Send to share the files to the receiving phone. Finally, touch the Accept button on the receiving device to start the transfer process.

Nearby Share is an available feature under Google frame on most Android devices. If your Android device has Nearby Share, you can easily share the Android files to all contacts after several settings.

Let's see how to get it done. 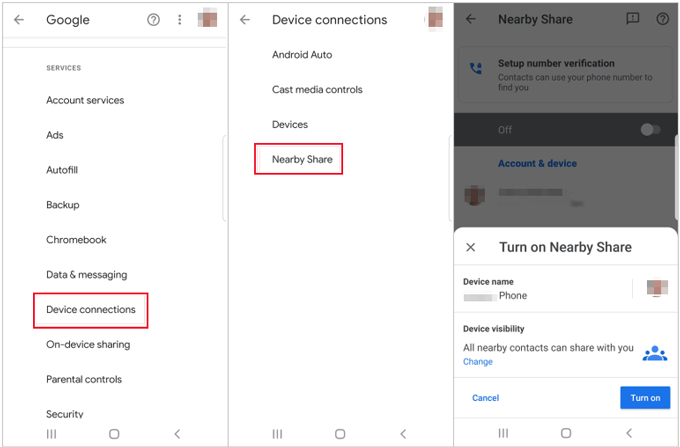 2. Choose Device visibility and set your device to be visible by All Contacts or Some Contacts. Next, back to the last screen, tap Data usage and choose one option from Data, Wi-Fi only, and Without the Internet to make it easy to share files. 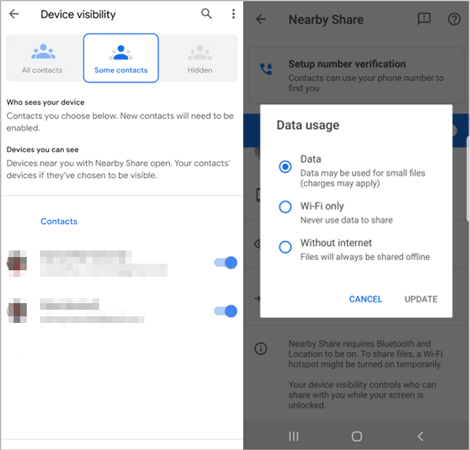 3. Ensure that you have enabled Bluetooth and Location on both Android devices. After that, open an app like Gallery on one Android phone, choose a photo or video you wish to share, and click the Share icon > Nearby Share > tap the other Android's name from all nearby devices.

4. On the receiving phone, tap the message Device nearby is sharing to receive the file.

Note: You can only share files between Android devices via Nearby Share when both devices support the feature. If you cannot find Nearby Share under Google > Device connections, you can download the Google Play Services (Beta) app and get this feature after the beta version is activated.

This post offers you five feasible ways to transfer files between Android devices via Wi-Fi, and you get better choices if you dislike wired transfer. Although all the five methods do this job, you will find the solutions like Wi-Fi Direct, personal hotspot, and Nearby Share are rather complicated in operation. Therefore, I strongly recommend you pick Coolmuster Mobile Transfer or Coolmuster Android Assistant.

Whether you want to transfer everything in one click or selectively preview and choose the desired data to transfer, these two tools can fulfill all your requirements. Most importantly, if you encounter any difficulty, you can always contact us online at any time. Isn't it a good choice?

How to Transfer Files from Xiaomi to PC with or without USB? (5 Easy Ways)

[Solved] How to Transfer Files from PC to Android Phone without USB Cable in 2021?

How to Transfer Data from Old Tablet to New Tablet? (Updated)

How to Transfer from Huawei to iPhone? 3 Easy & Quick Ways