Home>>iOS Devices Tips>>New iPhone 2018: All You Want to Know about the Latest iPhone

Summary: In this article, you will see all you want to know about the new Apple iPhone for 2018, including the release date, new features, tech specs, prices, names and more. 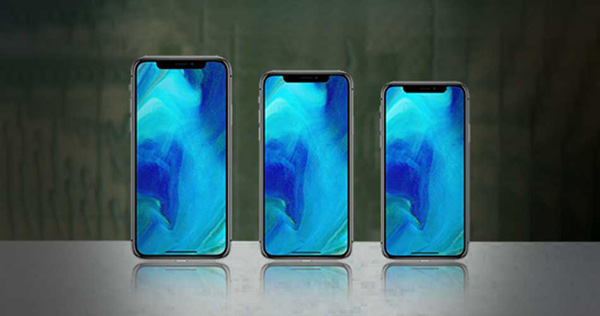 After launching the upgraded operating system - iOS 12 without new iPhone handsets on WWDC 2018 in June, Apple's next iPhone update in 2018 finally launches three new iPhone X-style phones. Here in this article, you can learn everything about the latest iPhones, such as the release date, new features, prices, design, specifications and more.

Before September 12, it's unclear whether the iPhone X nickname is a one-off product that Apple uses to commemorate the 10th anniversary of its smartphone lineup, or all future handsets with new designs will be part of the X-series. As we move deeper into 2018, we expect this to become clearer, especially when we find out how many iPhones Apple plans to launch this fall.

Before the official names for 2018 iPhone are published, there are some potential names are called for the next iPhone in the air. Apple may retain its current naming convention to differentiate its high-end X lineup with more affordable options (in any case) or change in some case.

When Are the New iPhone Released?

Apple follows the traditional release plan, and the new iPhone is released on September 12. Besides, the 2018 iPhone - iPhone Xs Max, iPhone Xs and XR is available in early September. Apple usually pauses major iPhone updates before September, and there is no reason to believe it will deviate from this model. Before September 12, there are no specific announcements about the exact release date, even though most rumors believe the new iPhone will be launched in the fall. By the way, Apple launched the iPhone X, iPhone 8 and iPhone 8 Plus on September 12, 2017, and launched the iPhone 7 lineup on September 7, 2016.

How Many New iPhones Are Launched in 2018?

Before it is clear to the public, there are many prediction among people. As the analyst Ming-Chi Kuo predicted, the new iPhone will have the same full-screen design and the gaps, what's more, the new iPhones may have the following design.

> 5.8" OLED: The successor to iPhone X, with basically same design.
> 6.5" OLED with dual SIM: The Plus version of iPhone X, also known as iPhone X Plus or XI Plus.
> 6.1" LCD with dual SIM: A cheaper iPhone, designed to be the same as X, but with a slightly larger bezel and LCD display. It will use Face ID instead of 3D Touch and will not be equipped with a dual lens at the rear. 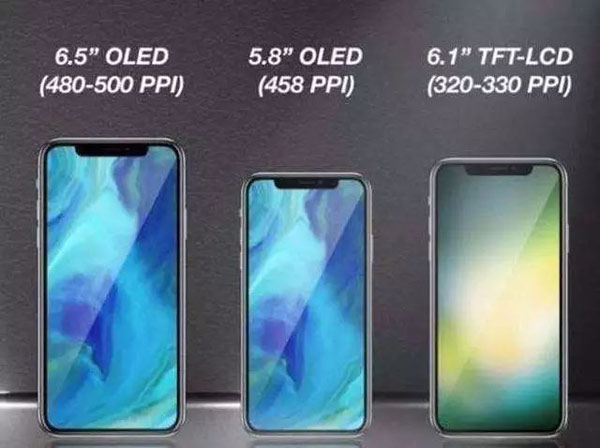 Of course, there are some different voice about the new iPhones. As Nikkei argues, the latest model of iPhone will be 6.3 inches. And according to DigiTimes analyst Luke Lin, Apple is expected to release four new iPhones with different assumption for new iPhones' design. 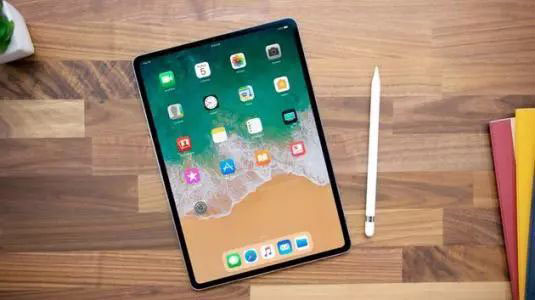 The first research report by the analyst Ming-Chi Kuo since he left KGI in April shows that Apple will launch a "more aggressive" pricing strategy this year. as he believed, Apple is concerned about "the negative impact of a higher price" and has improved the cost structure due to increased assembly output. The prices of the new iPhones are recommended as follows by him:

What Are the New Features and Tech Specs of 2018 iPhones?

Face ID is added to iPhone at the end of 2017, which is what we can expect in 2018. Apple extends the new Face ID facial recognition technology to all new iPhones released in the fall of 2018, as the Touch ID fingerprint scanning on screen remains a technical challenge. Before that, Kuo's this prediction was supported by two reports from Apple's Asian supply chain, all of whom agreed to apply Face ID to all three new iPhones in 2018. 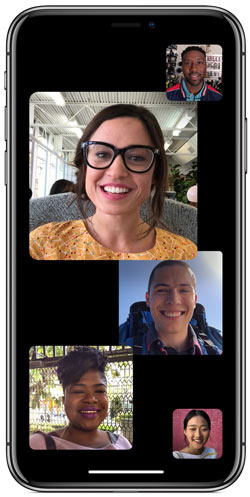 The second SIM state is referenced in the fifth version of the iOS 12 beta. As the Apple analyst Ming-Chi Kuo said, with the embedded Apple SIM, the 6.1-inch iPhone XR, 5.8-inch iPhone Xs and the 6.5-inch iPhone Xs Max supports dual SIM cards. This dual card option may only be applicable to the Chinese market since it is very common to have two phone numbers in China. 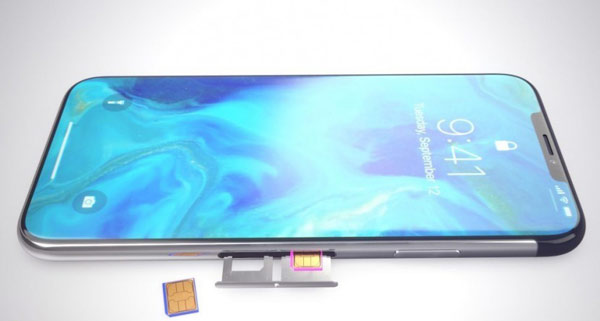 In the iPhone 2018, a new proprietary Apple chip called "A12 [codename]" is expected to equipped with the new iPhones, following A10 Fusion in iPhone 7 and A11 Bionic in iPhone 8 and X. TSMC has begun mass production of the new chips, using a 7-nanometer design which "can be smaller, faster and more efficient than 10 nanometer chips." iPhone X and iPhone 8 (and Qualcomm Snapdragon 845 processors for Samsung Galaxy S9 and S9 Plus, Sony Xperia XZ2, LG G7 ThinQ, OnePlus 6, etc.) all use 10 nanometer chips, so you can expect the next generation iPhone to be more efficient.

Apple added 3G to the second-generation model of iPhone, and released 4G with launch of iPhone 5. In this fall, Apple is expected to add 5G to its new iPhones if the test is successful, however, in fact, Apple has not added 5G to the new iPhone 2018 as expected. 5G will provide faster cellular Internet connections, but the details remain ambiguous. At present, there is no 5G standard, although many companies are working hard to agree on technology and specifications.

Tip: How to Transfer Files from Old iPhone to New iPhone?

The new iPhone 2018 is coming soon and if you are going to switch to a new iPhone, you might need to transfer files from old iPhone to new iPhone. If so, the professional Phone to Phone Transfer tool - Coolmuster Mobile Transfer (Windows/Mac) would be quite helpful for you.

With it, you can freely transfer data from one phone to another without restrictions. You are allowed to freely transfer contacts, calendars, bookmarks, eBooks (PDFs & ePubs), notes from iOS to iOS. Besides, you can also transfer data from Android to iOS device, from iOS to Android device or from Android to Android device without hassle. Almost all generations of iPhone, iPad and iPod touch are supported, including iPhone Xs Max/Xs/XR/X/8 Plus/8/7 Plus/7/6s Plus/6s/6 Plus/6/5S/5/SE, iPad Pro, the new iPad, iPad Air, iPad 2/1, iPad mini, iPad with Retina display, iPod touch/Shuffle/Nano/Classic and etc.

3 Steps to Transfer Data from One iPhone to Another:

(1) Download, install and launch the program on your computer and connect your two iPhones with USB cables. Make sure the latest iTunes is installed on your computer. Unlock your iDevice and trust this computer if prompted. 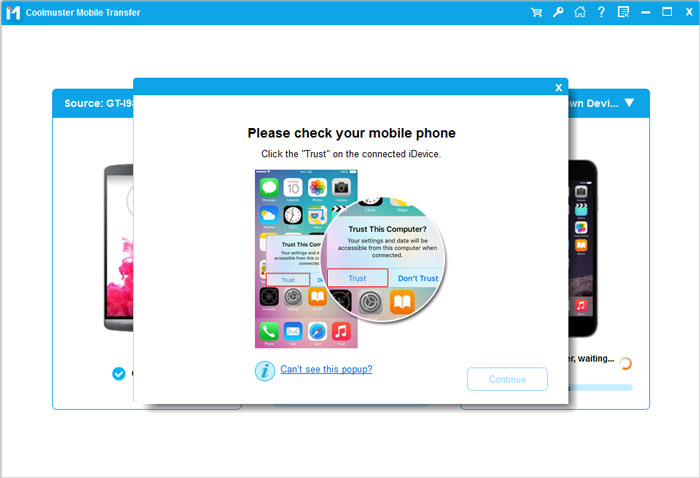 (2) Choose desired contents for transferring to a new iPhone. 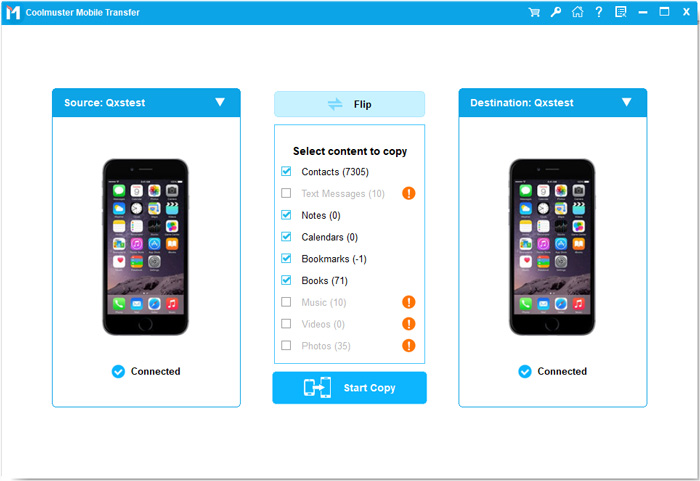 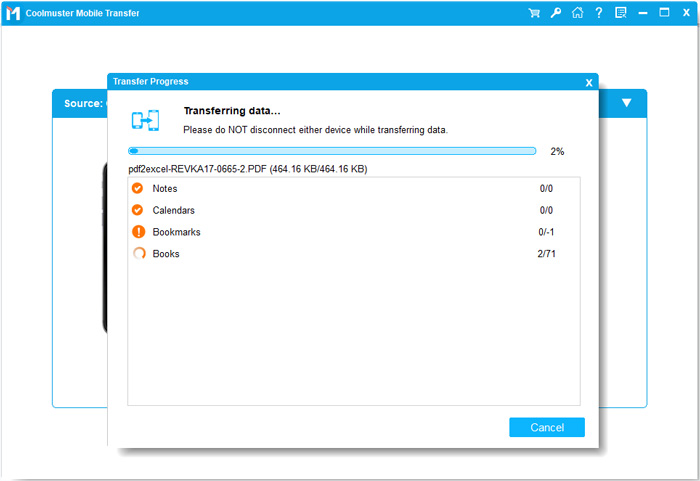 Everything You Need to Know about iOS 12

iPhone X or iPhone 8/8 Plus, Which One is Your Choice?