How to Transfer Apps between Two Samsung Galaxy Phones?

You may have the need to transfer or sync applications from one Samsung phone to another when you bought yourself a newly released Samsung Galaxy S9 to replace your old Samsung mobile phone. Or there may be some other reasons for you to share data between two Samsung phones, for example, you want to share your favorite videos, music, photos, apps and other files with your friends or families who are also using Samsung phones.

Transferring apps between your Samsung Galaxy devices is a smart measure so that you can save yourself from spending a lot of time to download and install the same applications on your new Samsung Galaxy S9/S8/S7/S6//Note 8/7/6/5 again and again. For that case, is there any simple and quick way to transfer selected apps between two Samsung Galaxy phones? The answer is YES of course! Just read on to learn how.

Solution 3. Transfer Apps from Samsung to Samsung with Android Assistant

Below is the tutorial on how to use it:

Step 1. Install the Samsung Smart Switch app on the two devices and then open it. 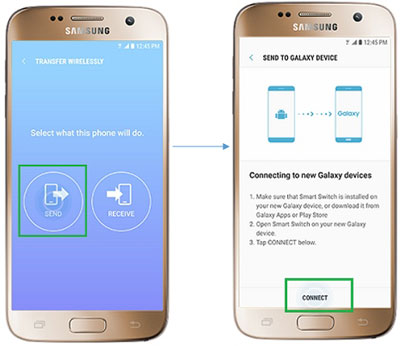 Step 2. Place the two Galaxy devices within 50 cm between each other. Then tap on the "WIRELESS" > "SEND/RECEIVE" > "CONNECT" buttons from one of them to begin the connection. 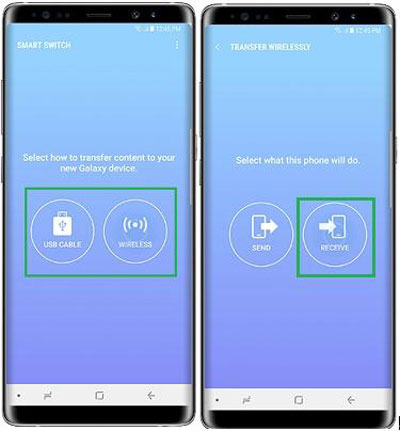 Step 3. Then you will see the below screen on each devices. Now, you can select the files you want to transfer from one Galaxy to another Galaxy phone. Finally, tap on "SEND" option on one Samsung phone to begin the file transfer. On the promo dialogue, remember to choose the "RECEIVE" option to receive contents from another device. 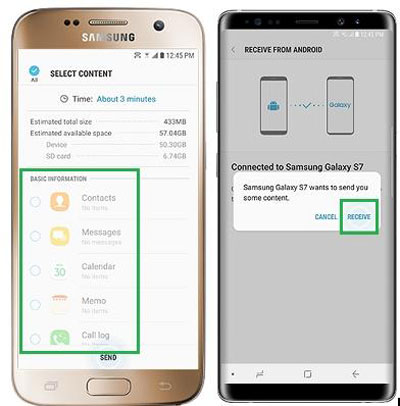 Now, you just need to wait for the file transferring process to get completed within simple clicks.

However, if you want to transfer files from one phone to another non-Galaxy device, this Samsung Smart Switch won't work, but Coolmuster Mobile Transfer or Coolmuster Android Assistant tools can make it!

To easily transfer the apps from Samsung to Samsung, it is kindly recommended to ask for help with the help of a professional too - Coolmuster Mobile Transfer. It is an ideal Samsung file transfer tool, which enables you to transfer not only apps, but also contacts, text messages, call logs, songs, movies, photos and many more from one Samsung phone to another easily and quickly with just a few mouse clicks.

The software is fully compatible with phones with different OS, including the most popular iOS and Android that you just never need to worry about the compatibility issue. Now, read the tutorial as below to get the tips on switching apps between two Samsung Galaxy S/Note.

Before that, you can tap on the following button to download the Windows or Mac version of Coolmuster Mobile Transfer on your computer.

How to Transfer Text Messages between Samsung and iPhone

How to Transfer or Copy Files from Android to Samsung

After correctly install the Phone to Phone data transfer program, you can launch it on your computer and then the program interface will pop up. 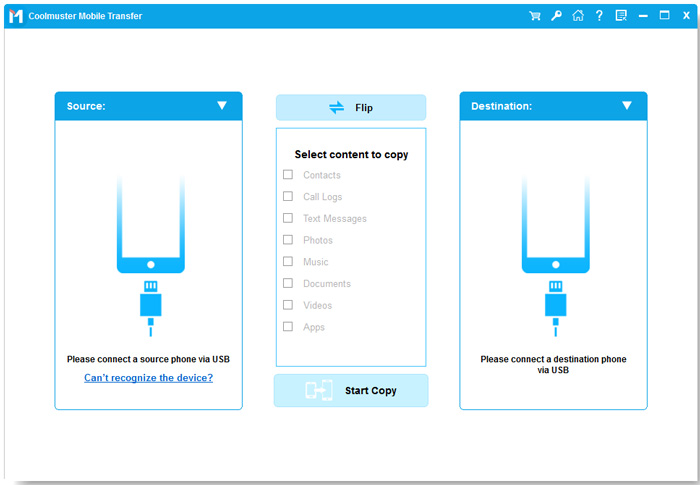 Then, connect both of your Samsung Galaxy phones to your computer through two USB cables. After the transfer program detects your phones successfully, you can see them displayed on the window, one is on the left and the another on the right.

Now, you can see all the data that can be transferred is displayed on the program. What you need to do is just check the option of "App" and click on the transferring arrow to transfer them to your new Samsung Galaxy phone. 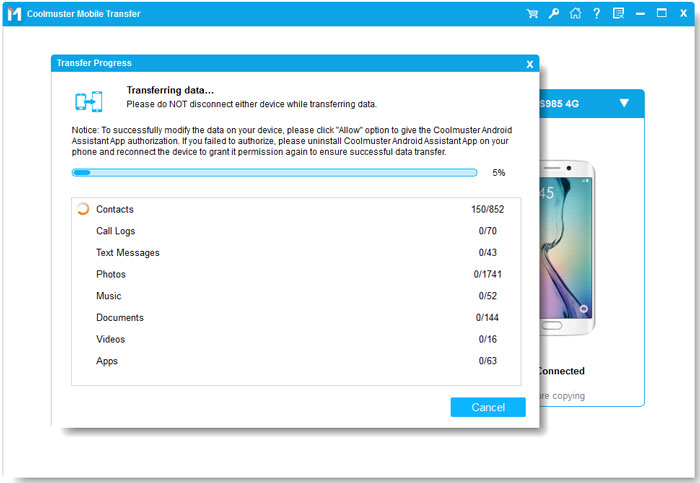 Make sure both of the Samsung mobiles are connected to the computer during the apps transferring process. When the transfer finishes, you can click "OK" button and eject the phones.

3. Transfer Apps from Samsung to Samsung with Android Assistant

Thanks to another wonderful tool - Coolmuster Android Assistant, you can have more selections to make the apps transfer easily as well as quickly. Just three simple steps will move all the apps you need between different Samsung Galaxy devices in a short time.

Don't worry, there is no any compatibility issues will happen after the transfer. Besides apps, Android Assistant also supports to transfer contacts, SMS, photos, videos, music and more from Android to Android, Android to computer, or computer to Android. And it is fully compatible with Samsung Galaxy S9+/S9/S8+/S8/S7/S6/S5/S4, Samsung Galaxy Note 8/Note 7/Note 6/Note 5/Note 4, Samsung J3/J3 Pro, Samsung Galaxy A9/A8/A7/A5 and etc. Now, read the part below and get the tips on transferring apps between Samsung Galaxy phones.

You can click the following button to download the Windows or Mac version on your computer first.

Step 1. Launch the tool on your computer and connect two Samsung Galaxy phones to PC via USB cables. 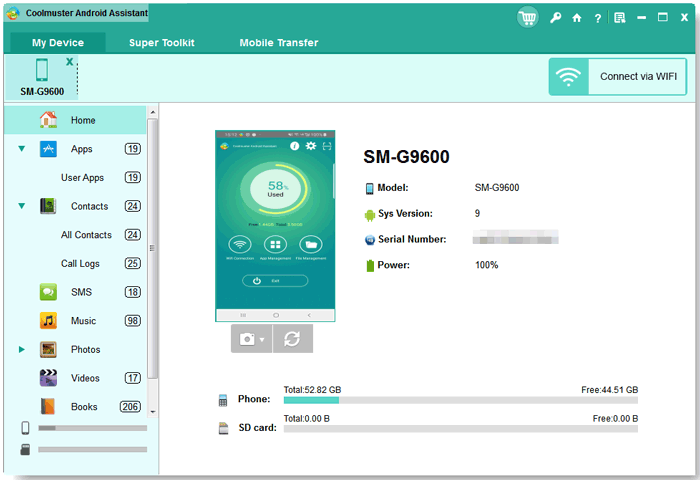 Step 2 . Click the old Samsung phone icon, choose "Apps" tab, then select the apps you need to transfer and click "Export" to move them to your computer. 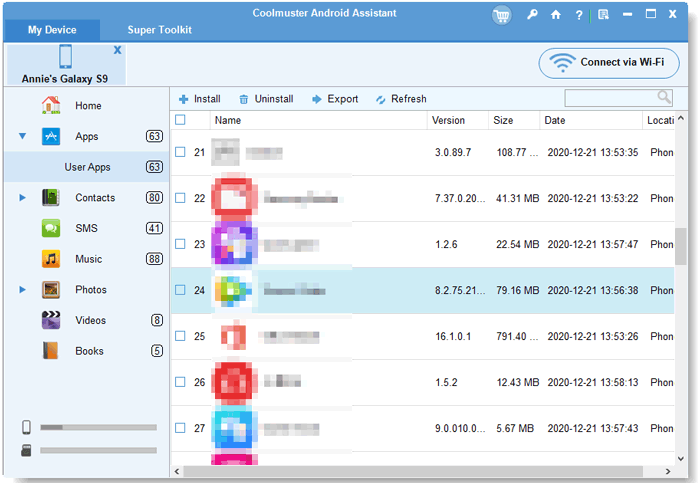 How to Transfer Photos from Samsung to iPhone [Top 4 Methods]