How to View Text Messages on Computer for Android Phone Users? (Solved)

Where are the text messages saved on an Android phone?

Here in this article, we share different 3 ways to help you read text messages of Android phone on computer, either a Windows PC or Mac computer.

Tip: If you want to know more details about the Android text message folder location, check this article: Where Are Texts Stored on Android Phone >>

Way 1: How to View Android Text Messages on Computer with Android Assistant

As one of the best Android SMS manager apps, Coollmuster Android Assistant also allows users to send and receive SMS via computer directly, copy/restore/delete/backup/forward messages for Android, and add, delete or edit contacts on computer. It supports almost all Android brands, such as Samsung, Xiaomi, Huawei, Sony, HTC, Motorola, LG and so on, and it works with the latest Android phones as well, such as Samsung Galaxy S20/S10/S10+/S10e, HTC U11+/U11, Xiaomi 9/9 SE/8, HUAWEI Mate X/Mate 20/Mate 10 Pro, etc.

Let's take a look at its detailed user guide together. First of all, take a trial version of this SMS Reader for Android with below buttons.

Below is the step-by-step guide showing you how to use Coolmuster Android Assistant to export and view text messages on computer. The following pictures are captured from Windows version. If you are running a Mac computer, you can also refer to the guide as below because the operations are almost the same on both Mac machine and Windows PC.

Steps to Read Text Messages from Android on Computer with Coolmuster Android Assistant:

Connect your Android phone to the computer via a USB cord or Wi-Fi. Then, you will see the connected phone is detected by this program automatically. If it is the first time to run this software, you may be asked to follow steps to enable USB debugging on your phone at first. If your device can be detected by the program, you can directly skip to the next step.

From the left side menu, you can see all the files in your cell phone will be displayed in categories. Click the "SMS" icon and you will enter the SMS managing window. All the text messages in your phone will show in list on the right. Mark the SMS you want to read on your computer and click the button of "Export". 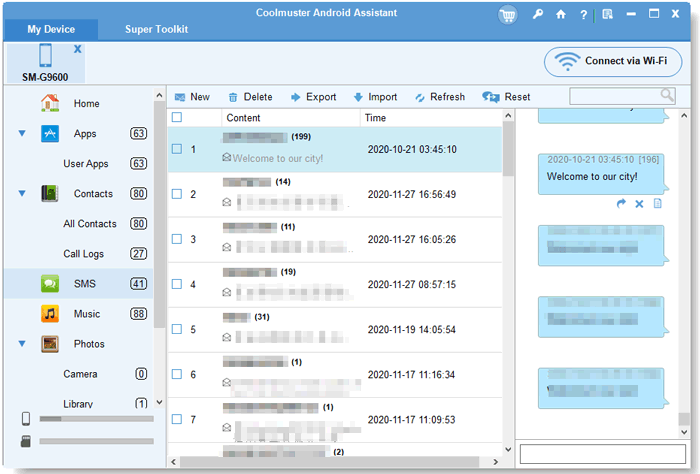 Step 3. Start to export SMS at once

There will be a "Path" dialog appears after your click the "Export" button. Just choose an output location for saving the exported text messages and then click the "Ok" button to begin the transfer process.

After a few while, all the selected text messages will be exported to your computer successfully. You will see all the text messages are saved in readable format and you can read them on the computer without any hassle. For example, you can save Android SMS in readable HTML, when you open it, you might see the Android messages as below, including the sent messages, received messages and even failed messages.

For more fantastic functions of the program, you can get it installed on your computer and try it out by yourself!

Another way to check Android phone's text messages on computer is using the Coolmuster Lab.Fone for Android (for all Windows versions) or Coolmuster Lab.Fone for Android (Mac). It is specially designed for Android users to recover lost and deleted text messages, as well as contacts, photos, videos, music, call logs and more from Android mobile phone and tablet with just several mouse clicks. However, you can also back up and export both of the existing and deleted text messages from Android device to computer so that you can use it to read SMS messages of Android on computer in readable HTML or XML format.

Both lost and existing messages can be detected by the program, so you can only choose the existing ones for exporting. And it is compatible with almost all Android phones (from Andorid 2.0 to 9.0 or up) as well.

How to View Text Messages on Computer with Android Phone:

1. Download, install and launch the Coolmuster Lab.Fone for Android on your computer;

2. Use a USB cable to connect your Android phone to the computer;

3. All detectable file types are displayed on the left, just click to open the "Messages" category to view all contained text messages, as well as the deleted ones;

4. Preview and select the deleted text messages you want back and click the "Recover" button to save as HTML or XML file. 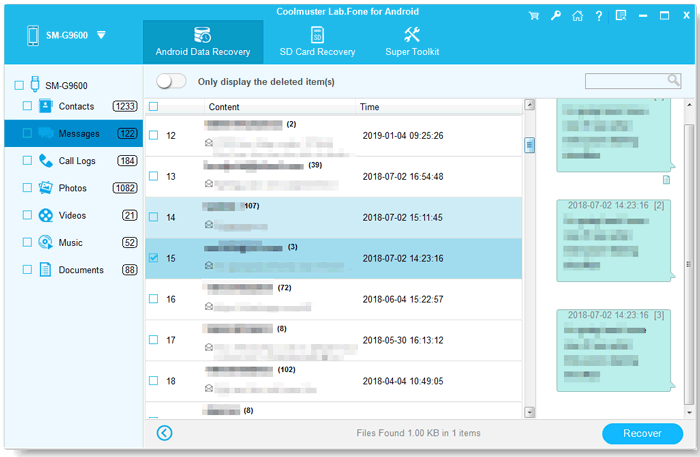 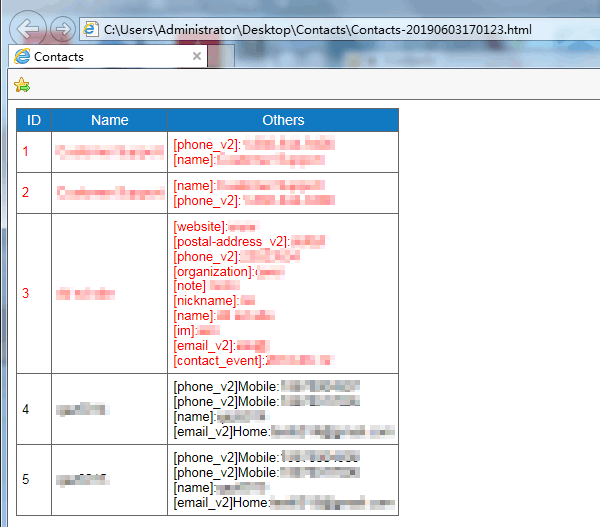 Way 3: How to Check My Text Messages from Android on Computer via Android Messages

"How to view/read my text messages of Android on computer?" asked by some users. Actually, if you want to read messages from Android using computer, Google's default SMS app for Android phone - Android Messages for web might help you out with this. The Messages for web can also help you to send messages when you connect your phone to computer. Even so, you still need to pay for the fees of sending messages as you do on the mobile phone.

It is worth mentioning that the QR code for Messages for web is unique to your computer and pairs the mobile app with that computer. Even though you can pair your messaging accounts on multiple devices, only one of them can be activated at a time. That is to say, when you open Web-based Messages on your computer, the conversation on any other computer or browser tab becomes inactive.

Now, let's see how to view text messages on computer from Android device below.

Step 2. Start your computer and launch Messages for web with a web browser, such as Chrome, Mozilla Firefox, Safari, or Microsoft Edge (Internet Explorer is not supported).

Step 3. After opening Messages app on your phone, please tap "More" > "Messages for web", then tap "Scan QR code" button to scan the QR code on the web page.

Step 4. On your computer, you might now click "More" > "Settings" button, and turn on "Enable dark theme" or "High contrast mode". Now you can read text messages of Android on computer freely. 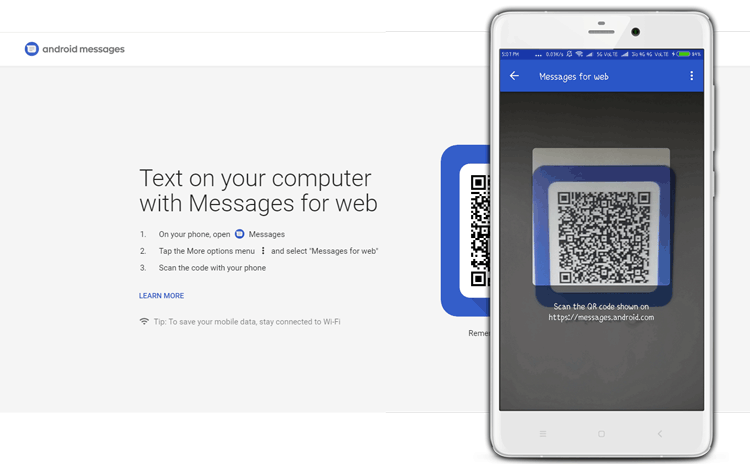 How to Save Text Messages from Cell Phone to Computer

How to Transfer Text Messages from HTC to Computer

[Solved] How to Transfer Text Messages from Android to iPhone

How to Forward Text Messages on Android? [Full Solution]