The Favorite Methods to Transfer Videos from Android to Mac, without Struggles

It has been noted that there is a great number of individuals who often decide not to transfer their beloved videos from Android to Mac, because they believe it is going to be a major struggle due to having these two different operating systems, which tend to be in competition on the market in more than one aspect. Even though a struggle to conduct this type of action might have been somewhat of an issue a few years back, this is no longer the case, especially when one implements one of the following methods, which have not failed in acquiring a galore of positive reviews. Indeed, everything has changed for the better, even the methods!

Method 1: How to Transfer Videos from Android to Mac via Android Assistant

If you want to transfer video from Android to Mac, without ever having to question the effectiveness of the transfer, then Coolmuster Android Assistant for Mac is at your service. There is other software on the market, created to conduct same function, but they have not been able to compete with Coolmuster Android Assistant. The structure of this system is not comparable to any other. It is simply one-of-a-kind, hence why numerous of downloads are conducted each day. The positive reviews keep coming its way, and this is certainly not going to change anytime soon.

There are a lot of applications, and manual methods that can certainly help in the transferring of videos, but they cannot be compared to the type of function that Coolmuster Android Assistant provides every time it is launched. With this system, there is no risk of errors, which if of great help if you are about to transfer videos that have meaningful value in your eyes. Besides, it supports almost all Android devices, such as Samsung Galaxy S10/S10+/S10e/S9/S9+, Huawei Mate X/Mate 20/Mate 10/V20/V10, etc. 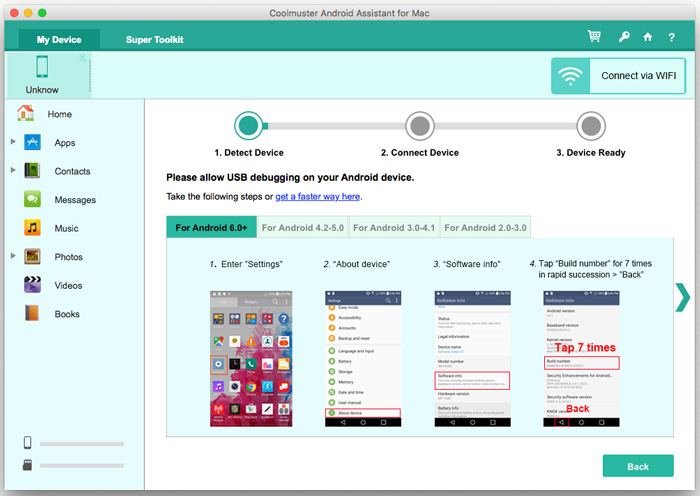 2. Now, it is time to connect device to computer to transfer video from Mac to Android. You can conduct this with the aid of a USB cable or Wi-Fi. 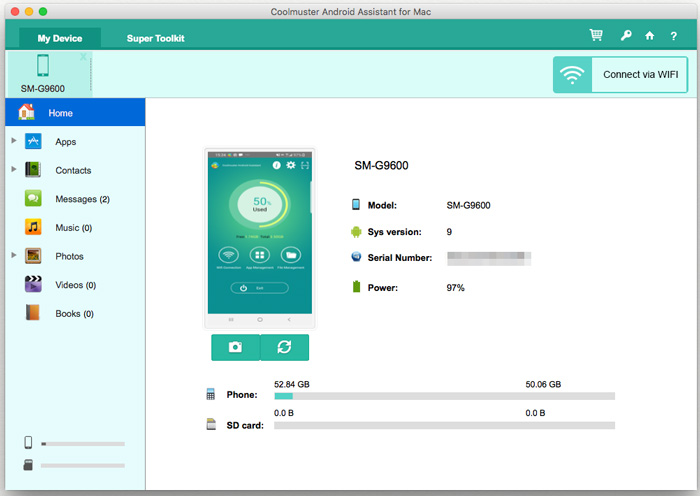 3. On the left menu, click on the Video folder that contains the videos and begin to select the ones that you want to transfer. After doing so, click on 'Export.' Not only TV shows, but also music videos, movies, the videos you have captured and more are supported to be transferred. 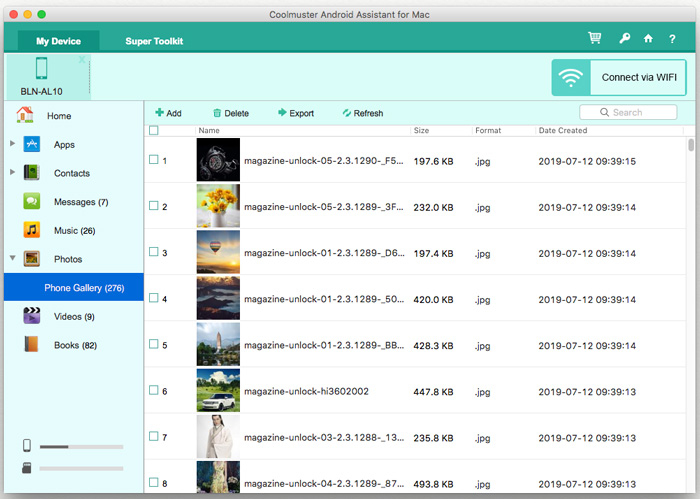 With Coolmuster Android Assistant, the "how to transfer videos from Android to mac, without any errors?" question will no longer pop again on your mind. You will begin to love it as soon as you give it a try.

How to Transfer Photos from Samsung to Mac for Backup? 4 Ways in 2020

If you want to know how to transfer videos from Android phone to Mac with an application, this is one that you should highly consider. The raving reviews keep pouring in for it, but remember that only certain software can prevent any errors from arising. Even so, there are more than a handful of application developers who have released solutions that appear to provide the same function as this one, but they have not been able to be of great help.

There have been a lot of negative reviews pouring in their way, which has made the AirDroid Android application more popular. It appears that when an application is copied, people want to download the real deal to find out what is so great about it.

1. If you have not already done so, install the AirDroid Android application on Android device. Depending on your connection, it should take about one or two minutes. Yes, it is quite fast.

2. On your Mac, visit AirDroid.com and create an account if you have not already done so.

3. By doing the previous steps, you will link Android device to Mac and will be able to easily begin a transfer.

4. Follow the instructions that will appear on Mac screen and then select videos that you want to transfer. That is all!

Method 3: How to Transfer Videos from Android to MacBook via Android File Transfer

1. If you have not already, download 'Android File Transfer' to your MacBook. It should only take one or two minutes to conduct. 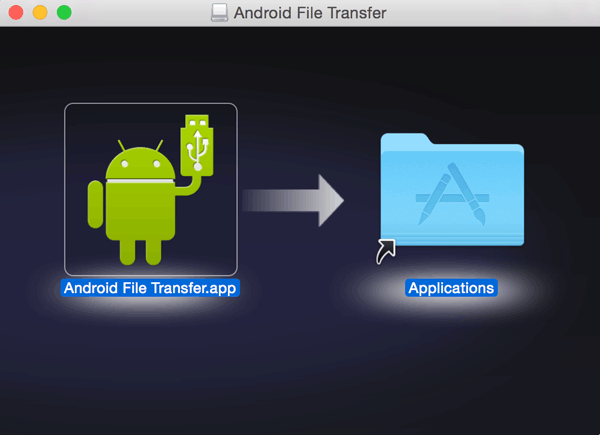 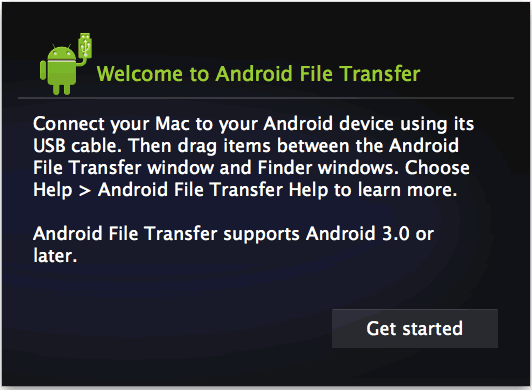 4. On list of drives find 'Android File Transfer' and then double-click on 'Android Drive.'

5. You will see a list of applications. To view or open apps, drag to MacBook and move them as you want. Then, begin to import videos to iMovie. A very simple process that is not confusing at all! 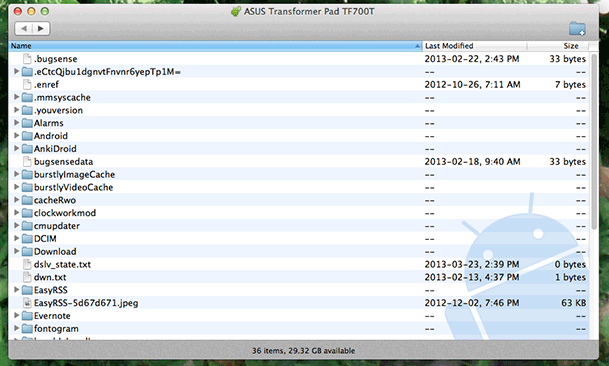 Method 4: How to Transfer Videos from Android Phone to Mac with USB Cable

If you want to know how to transfer videos from Mac to Android, without having to undertake a handful of steps due to being in a hurry or whatever your reason might be, this is a method that can come in handy when undergoing this type of situation.

2. Click on 'USB Connection' and then 'USB Mass Storage.'

5. Select videos you want to transfer and then drag to Mac's desktop. Quite simple! 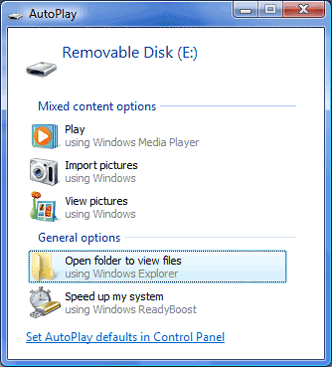 Method 5: Transfer Video from Android to Mac by Email

This has often been considered to be one of the easiest ways to transfer any video from Android to Mac. Even so, it should not be implemented if you have numerous videos that need transfer, as this could take many hours to take place. This is an option to consider if you have one or two videos that need to be transferred.

Other than that, resort to another method, such as the Coolmuster Android Assistant (Mac version), especially if your videos are of extreme value. The reason this is being said is due to the fact that there have been situations where emails have been hacked and thus personal videos have been released to the public, without permission. Be careful! 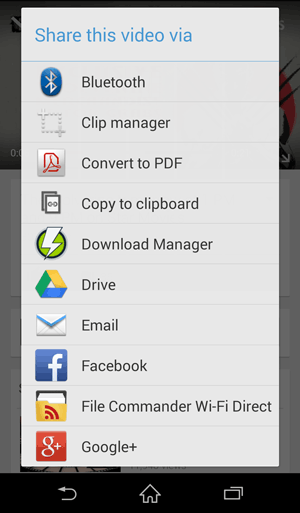 Depending on your needs, your method of choice will vary from others; nonetheless, do not forget that having software at hand is extremely important when transferring important videos, as the other methods will not be able to protect them in every aspect. We suggest keeping Coolmuster Android Assistant (Mac version) at hand just in case. It is always better to prevent than for one to later suffer from a video error matter. Although rare... it can certainly happen with applications, or manual transfers.

How to Recover Deleted Music/Songs from iPhone XS Max/XS/XR/X/8 Plus?

How to Transfer Videos/Photos between Huawei and Computer?

Top 5 Apps to Transfer Files from Mac to Android