How to Sync Android Phone/Tablet with iPad Air/mini/4?

Most people think Android device and Apple iPad can be played nice with each other because the two gadgets are made by different companies and run with different operating systems. That's why even many people have both the Android phone and iPad at the same time, but never think about transferring data between the two devices. Well, certainly you can export the photos, videos and music from Android phone or tablet to the computer, and then sync them from computer to the Photo Library on iPad with a good helper - iTunes. However, you must be aware that all original photos in the Photo Library will be erased after you sync new photos to iPad. In addition, iTunes can do nothing with other data types like contacts and SMS.

If you are coming from an Android phone or Android tablet to a new iPad Air or Retina iPad mini, and wish to do a data transfer from the Android to the iPad without iTunes, Android to iPad Transfer can make the transfer process as easy as pie. No matter what you want to transfer, contacts, text messages, photos, videos, music, calendars and more, the Transfer tool can help you do it as easily as possible. The whole transfer process can be finished in one click without any data lose. Android to iPad Transfer supports almost all Android devices and iPad series, such as Samsung, HTC, Motorola, LG, Sony and so forth, as well as iPad Air, iPad mini, iPad 4, the New iPad, etc.

Now, free download the Android to iPad Transfer program on your Windows or Mac computer by clicking on the following buttons, and check the detailed steps as below to start syncing Android data with iPad.

After installing the downloaded Android to iPad Transfer, you should launch it to enter the primary window. Then, select "Phone to Phone Transfer" on the window and click "Start" to move to the next step.

Note: Before using the Phone Transfer to sync Android with iPad, you should install iTunes on the computer beforehand.

Step 2: Connect both your Android phone/tablet and iPad to the computer

Next, link both your Android device and iPad to the computer via USB cables. Wait until the program detects your devices and show them on the primary window. To sync Android with iPad, you should place Android on the left side, which is regarded as the source device, and iPad on the right as the destination device.

Note: Of course, you can click "Flip" button to change their positions. 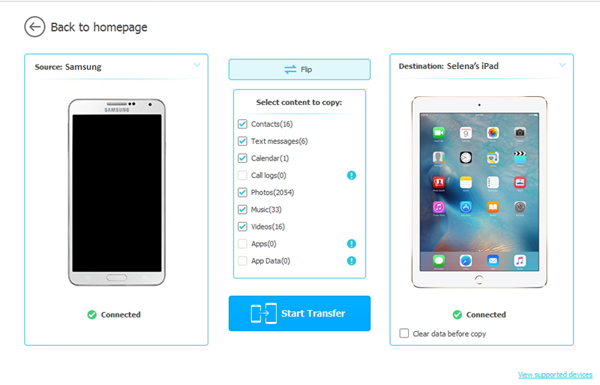 As you see on the program interface, the Android to iPad Transfer enables you to sync photos, videos, music, contacts, SMS, etc. at the same time. You can select the data you want to sync and click "Start Transfer". 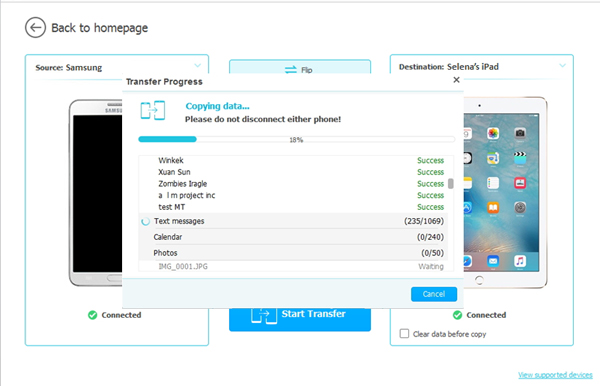