"My previous three phones have been from Samsung, so it has been pretty straightforward to transfer everything after connecting the old and new phones via USB cable. What would be the best way of doing the same thing if moving to a different manufacturer's Android device? Are there any apps that transfer all your settings, data, and apps and set it up the same way on the new phone, or is it a more tedious/manual exercise if you're going from one manufacturer to another?"

How to switch Android phones has baffled many people, even if they are experienced Android users. "When I get a new phone, does everything transfer from the old phone to the new phone?" "How do I switch phones and keep the same number?" Recently, I received many similar questions from different Android users.

Part 1. Things to Do before Switching Phones

1. Ensure that you have backed up all critical data on your old Android phone. Click here to see how to back up Android phone to PC.

3. Connect the two Android phones to the same Wi-Fi network.

5. Log out or deactivate the subscription accounts on your old Android phone before they function on the new phone.

7. When setting up the new Android phone, tap A backup from an Android Phone, and tap Next. Then turn to your old phone, open the Google app, and set up your device.

8. Consider the security when you begin the two-step authentication on your old Android phone, and do not tell other people about the code.

9. Launch Google Play Store, tap the menu icon > My apps and games and find the apps you installed on your old Android phone. Choose the ones you wish to have on your new phone and install them.

Part 2. How to Switch Android Phones

There are many ways to migrate Android to a new phone. Here we list the top four methods, and you can select one way you like from below.

2.1 How to Switch Android Phones in One Click via Coolmuster Mobile Transfer

The best app to switch phones is Coolmuster Mobile Transfer. With this program, you can directly transfer contacts, music, eBooks, SMS, call logs, photos, videos, and apps from Android to Android in one click. Besides, it also supports transferring data from iOS to iOS, iOS to Android, and Android to iOS.

If you are looking for the easiest way to swap Android phones, I highly recommend you give it a try.

* Easy to use, highly secure, and fast speed.

* No data loss happens during the whole process.

How to switch to a new phone in one click?

Open the app after installing it on your PC and choose Mobile Transfer from the interface.

2. Connect the two Android phones to the PC.

Use two working USB cables to connect both Android phones to the computer. After enabling the USB debugging on each phone, the program will automatically detect your devices. After a successful connection, you will see Connected under the device images on the program. (Note: The old Android phone must be in the Source position. If necessary, you can click Flip to switch them.)

Tick the content you wish to transfer and hit the Start Copy button to switch over data to a new phone. 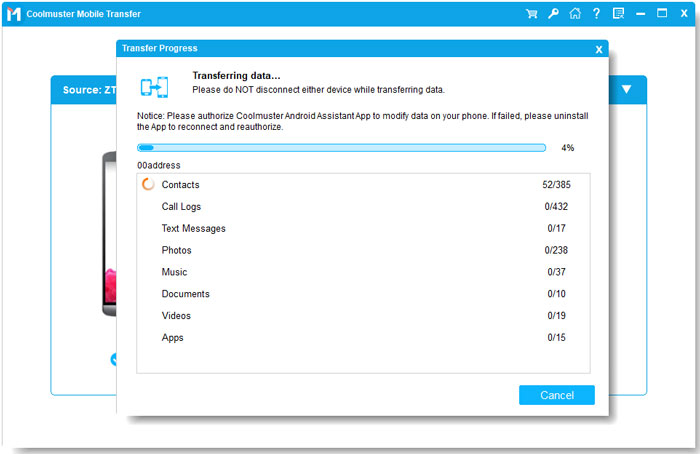 How to Transfer from Huawei to iPhone? 3 Easy & Quick Ways

2.2 How to Switch Phones and Keep Everything with Coolmuster Android Assistant

The second-best way to switch to a new Android phone is using Coolmuster Android Assistant. Like Coolmuster Mobile Transfer, this software allows you to transfer everything from Android to Android via the Backup and restore feature. Besides, it also lets you selectively migrate the specific data you want from Android to Android. Moreover, you can manage the Android data on the program as well.

What does Coolmuster Android Assistant do for you?

* Back up and restore the overall Android data on a computer in one click.

* Add, delete, and edit Android contacts on the PC.

* Send, forward, copy, and reply to text messages on your computer.

* Install & uninstall apps from the computer.

How do you change phones via Coolmuster Android Assistant?

After installing and launching the program on your computer, click Android Assistant to continue.

2. Connect both Android phones to the PC via two USB cables.

Plug the two Android phones into the PC using two USB cables and enable the USB debugging on each phone. Once connected, you will see the interface with the Android phone's primary information on it. 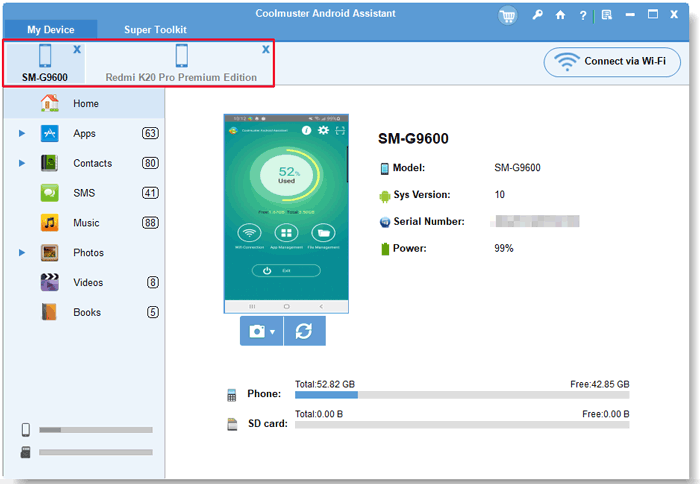 Click the Super Toolkit section on the top menu > tap Backup > choose the old Android phone from the drop-down list > check the file types you wish to transfer > tap Browse to define a storage location > hit the Back Up button to back up your old Android device to the computer. 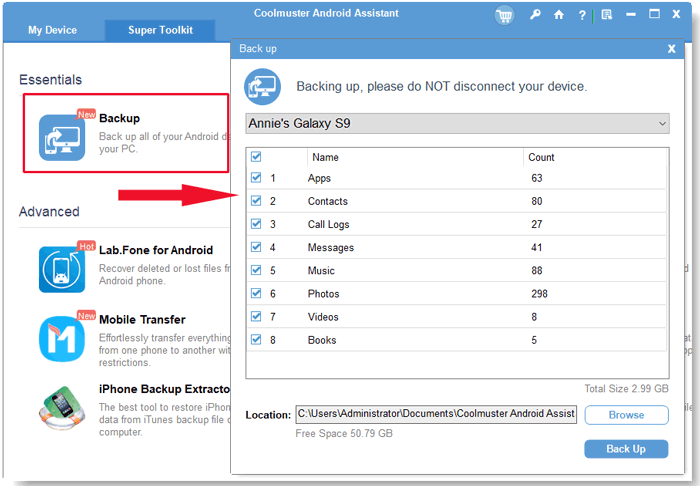 After backing up, click the Super Toolkit tab on the top menu again > tap Restore > choose the new Android phone from the drop-down list > tick the content you want to restore > press the Restore button below.

When the whole process is complete, you will move the old Android data onto the new phone. 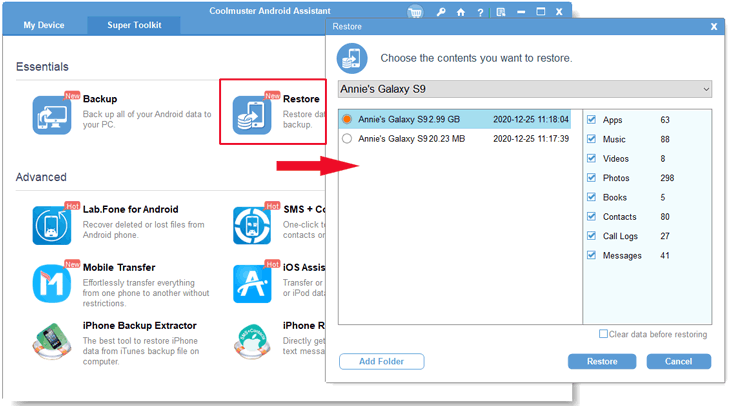 4 Useful Ways to Transfer Contacts from Samsung to PC

How to Export Android Contacts to Excel Format (CSV or XLS)

2.3 How to Transfer to a New Android Phone Using Google Drive

Google Drive can automatically sync contacts, texts, call logs, and settings between your Android phone and the Google cloud. Thus, to transfer data to a new Android phone, you will need to ensure that you have signed in to your Google account on both devices.

How do you switch your phone to another phone via Google Drive?

1. On your old Android phone, open Settings, scroll down to select System and tap Backup. 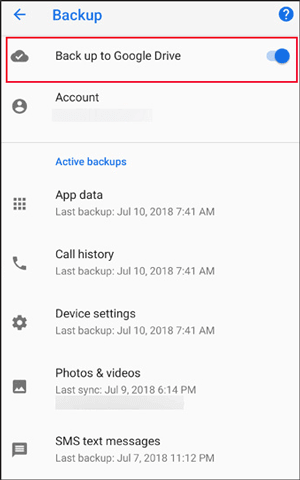 2.4 How to Switch Over Phones with Samsung Smart Switch

If your new Android phone is a Samsung device, you can switch from Android to Android via Samsung Smart Switch, free to use and convenient.

How to switch phones via Samsung Smart Switch?

1. Install Samsung Smart Switch from Google Play Store on your old Android phone and open it. After that, select Wireless > Android > Send > Connect.

2. On your target Samsung device, go to Settings > Cloud and accounts > Smart Switch to launch the app. Next, choose Wireless > Receive. Make sure that you have placed the two devices close enough.

3. After connection, choose the data you want to transfer on your old Android device and tap Send. Finally, receive the data on your Samsung phone. 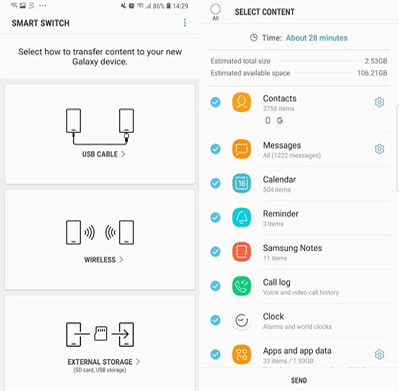 Part 3. Things to Do after Switching Phones

What do you need to do after switching Android phones? Well, you may need to do the following things:

As you can see, switching Android phones means data migration and many other things you need to pay attention to before and after the data switch. This post gives you a complete understanding of how to switch Android phones. You can refer to our instructions if necessary. Also, to transfer data between Android phones, you can use Coolmuster Mobile Transfer or Coolmuster Android Assistant. Both of them are secure and simple to use.

Finally, if you need to know more about Android transfer, you can leave a comment below.

How to Transfer Pictures from Android to Android? (4 Ways)

How to Transfer Text Messages from Android to Android? (6 Methods)

How to Transfer Contacts from LG to Samsung in 5 Ways? (2021 Updated)

How to Transfer Apps from Samsung to Samsung? (Fast Transfer)

How to Transfer Data from Sony to Samsung? (Top 4 Ways)